Get the Scoop on Animal Puke!

One of the most visceral memories from my childhood is the smell of the pellets that were poured on any vomit that was released by a fellow student. You forget many things, but it’s not hard to recall incidents related to vomit. I was prone to carsickness as a kid and I once ruined my sister’s Tiger Beat magazine. Shaun Cassidy‘s feathered hair took a beating. We know that our gut reaction to vomit is painful, but what you may not realize is how useful it can be. Need to defend yourself? If you are a northern fulmar bird, your projectile vomit keeps your species alive. Only laying one egg a year, these birds need this defense to protect their future. Page 19 has a fabulous photograph of this hurling bird in action. You and I can put a lock on our refrigerator. The turkey vulture does not have this luxury. Instead it will vomit on animals that try to take its food away. It’s bad to get thrown up on by any animal, but a vulture? That’s got to be particularly heinous. Insects vomit to deter predators. Did you know that insects vomit? Hyenas roll in their vomit to disguise their scent in order to surprise prey. They are working hard for their food! And we complain if the drive-thru line at Bojangles is too long. Get the Scoop on Animal Puke! makes you think of vomit in a whole different light. There is plenty of terrific science here. Pages 36-37 contain an informative discussion of why animals chew their cud. You may be thinking that the subject matter will be too distasteful for readers. I will argue that they will be fascinated. My wife and youngest daughter thought the facts that I hurled at them were very interesting. One of my favorite sections is located on pages 34 and 35. Plants release chemicals when insects and spiders chew and spit on them. These chemicals send a signal to insect and spider predators to come on by for a free meal. Plants fighting back. You can’t make this stuff up! Students will love this book. The photographs are fantastic and will stop readers in their tracks. I can’t wait to leave this book in our nonfiction basket tomorrow.

9780062333797
Born almost 5 billion years ago at the edge of the Milky Way galaxy, our Solar System is a place filled with mystery and wonder. In the last fifty years, we have learned more than ever about the farthest reaches of our world. With dramatic full-color photographs and spacecraft images, Our Solar System takes young readers on a fascinating tour of the sun, the eight planets and their moons, plus asteroids and comets. Award-winning science writer Seymour Simon presents this new, updated edition of his much-admired book about the vast and mystifying part of the universe that we live in.
A perfect book for an elementary age child just starting to show an interest in space. Simon’s name is a staple in library nonfiction collections, for good reason. His topics are well-researched, and accompanied by striking photographs and illustrations. Each planet gets individual coverage (including Earth – so many similar books don’t treat earth as an individual planet!), as do the sun, Pluto (I don’t care what the reason for its demotion is – and that reason is explained clearly – it will always be a planet!), asteroids, and comets. Not enough information for a report on any one of those, but a great jumping-off point.
Gift suggestions for this one are almost too numerous to sift through. My kiddos will be getting a copy along with a gift certificate for one visit to the nearby New Mexico Museum of Space History. They can’t get enough of the place! If you are not lucky enough to have something like that nearby, you could add a movie to watch together:

Don’t forget the popcorn!
Decorate the room with a 3D Glow-in-the-Dark Solar System.
Make your own models from this wood kit, or from this styrofoam one.
Put together a Solar System Floor Puzzle.
Or, go big and add this rug to your stargazer’s bedroom!
Pluto included! So there!

A True Tale with A Cherry On Top

“Brought together by the love of jazz, Teddy Wilson and Benny Goodman broke the color barrier in entertainment when they formed the Benny Goodman Trio.”

For a Tantalizing Taste and Something More, visit the blog of kidlit author, Jeanne Walker Harvey ***

Lives of the Explorers: Discoveries, Disasters (and What the Neighbors Thought)
by Kathleen Krull; illus. by Kathryn Hewitt

With Columbus Day right around the corner – at least around the flip of the calendar page – now seems a good time to talk about explorers. And Kathleen Krull does a pretty good job.

Part of her Lives Of.. series, Krull offers a collection of short biographies of men and women who have pushed the boundaries of their known world. She introduces the book this way:

“Exploring the unknown: it’s what humans do. Since the beginning of time, we have wanted to know what else might be out there.” And then she delves into the stories of people searching for “what else might be out there”: Leif Ericson, Marco Polo, Zheng He, James Cook, Lewis & Clark, Isabella Bird, Sally Ride, and more. From the well-known to the not-as-well-known, Krull tells about explorers’ lives, where they traveled, their deed both good and bad. Marco Polo, for example, tended to exaggerate his journeys and Columbus…. his encounters with the New World natives nearly wiped out their populations.

There are plenty of maps for the geographically-minded, with routes color-coded for different voyages. And each chapter ends with an “Onward” section full of interesting facts, towns named after the explorers, myths and more. At the back there’s a list of books for further reading. There is no index, but the table of contents fills that need fairly well since this is, after all, a collection of short biographies. 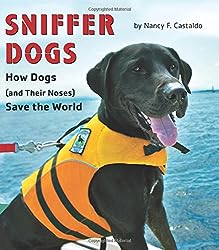 Sniffer Dogs: How Dogs (and Their Noses) Save the World
by Nancy Castaldo (Author)

Booktalk: Anyone who has ever spent time with a dog knows that dogs love sniffing! They sniff out hidden food, dirty socks, and the visitor who comes to the door. But some dogs work with police officers, soldiers and even scientists to put their “sniffers” to work. Sniffer dogs make use of the amazing biology behind their noses to protect people from bombs, catch criminals smuggling drugs, or help researchers locate a hard to find snail in a forest.

Snippet: During World War I and Wrld War II, dogs were used to help locate injured soldiers on or near the battlefield. These dogs were also called casualty or ambulance dogs. They were also used by the military as scouts, trackers, sentries, and messengers.

THE FAMILY ROMANOV
Murder, Rebellion & The Fall of Imperial Russia

“[A] superb history…. In these thrilling, highly readable pages, we meet Rasputin, the shaggy, lecherous mystic…; we visit the gilded ballrooms of the doomed aristocracy; and we pause in the sickroom of little Alexei, the hemophiliac heir who, with his parents and four sisters, would be murdered by the Bolsheviks in 1918.” —The Wall Street Journal

Here is the tumultuous, heartrending, true story of the Romanovs—at once an intimate portrait of Russia’s last royal family and a gripping account of its undoing. Using captivating photos and compelling first person accounts, award-winning author Candace Fleming (Amelia Lost;The Lincolns) deftly maneuvers between the imperial family’s extravagant lives and the plight of Russia’s poor masses, making this an utterly mesmerizing read as well as a perfect resource for meeting Common Core standards.

“An exhilarating narrative history of a doomed and clueless family and empire.” —Jim Murphy, author of Newbery Honor Books An American Plague and The Great Fire

“For readers who regard history as dull, Fleming’s extraordinary book is proof positive that, on the contrary, it is endlessly fascinating, absorbing as any novel, and the stuff of an altogether memorable reading experience.” —Booklist, Starred

“Marrying the intimate family portrait of Heiligman’s Charles and Emmawith the politics and intrigue of Sheinkin’s Bomb, Fleming has outdone herself with this riveting work of narrative nonfiction that appeals to the imagination as much as the intellect.” —The Horn Book, Starred

I’ve heard about the murder of the Romanov’s, I mean, who hasn’t, what with the Disney movie Anastasia and everything.  But there was a lot I didn’t know.  This book has filled in a lot of the blanks.  There will always be things that aren’t known, but Fleming does an amazing job of making the events leading up to and including the murder of the Romanov’s quite understandable.  The book is divided up into chapters that address both the Romanov’s life before and during the revolution but also takes a look at some of the people behind the revolution, including Vladimir Lenin, who became the first face of Communist Russia (Soviet Union).

It’s not a particularly happy story as it involves great suffering, poor leadership, and a great deal of ignorance. Tsar Nicholas II contributed a great deal to the events that lead up to the revolution by making very poor decisions about how to handle his people’s discontent.  Unfortunately choosing to follow in his father’s brutal steps, Nicholas shut down the rebellion, but only for a time.  Add to that World War I and more suffering and death, and what to the soldiers seemed like an uncaring Tsar only increased the anger and hatred that culminated in the revolution.

What I found especially interesting were the descriptions of the chaos that created the opening the Bolsheviks needed.  Reading about the last days of the Romanov’s was sad, but it was also sad to think about the tens of thousands of others who died during World War I as well as the civil war between the tsar’s supporters and the Bolsheviks.  It just reminded me that war hurts everyone it touches.  Ironically, even Lenin eventually realized that the Bolsheviks communist vision had failed.  When Lenin died and Stalin took control, Russia ended up with a government even worse than what they had had under the tsar.

A vividly portrayed and eminently readable account of an important and intriguing series of events that we can still learn from today.  Highly recommended.  I heartily agree with the talk about this title as a possible Newbery winner.

We look forward to seeing what you’re reading…so we can read it too!

Nonfiction Monday
Create a free website or blog at WordPress.com.