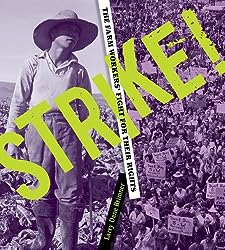 Strike!: The Farm Workers’ Fight for Their Rights
by Larry Dane Brimner (Author)

Booktalk: In 1965, as the grapes in California’s Coachella Valley were ready to harvest, migrant Filipino American workers—who picked and readied the crop for shipping—negotiated a wage of $1.40 per hour, the same wage growers had agreed to pay guest workers from Mexico. But when the Filipino grape pickers moved north to Delano, in the Central Valley, and again asked for $1.40 an hour, the growers refused. The ensuing conflict set off one of the longest and most successful strikes in American history.

Snippet: The Delano grape workers wanted better wages. Growers only paid them 90 cents an hour, plus 10 cents a log, or box, of grapes picked. At the end of the day, the average picker earned about $1.20 per hour, while some other farm workers were earning more.