Forest fires have been raging throughout the West, and equally heated controversies about what to do about them are also raging. Stepping into the fray, Collard explains the research of Biologist Dick Hutto and others who look at the effects of forest fires on birds and other living things. In the book, the author lists 15 species of bird that are closely associated with, and actually benefit from, forest fires. The book contains large color photographs and detailed sidebars of each species.

Collard has a strong writing style and conversational tone that really draw the reader in. Budding ornithologists and fire ecologists will find this title thought provoking and are likely to be inspired to find out more.

For a full review, see Wrapped in Foil blog.

Although this book has been covered here before by Liz Parrott,

it’s worth mentioning one final time before we turn the page to 2015.

The Port Chicago 50, as they became known, were a group of African American Navy sailors assigned to load munitions at Port Chicago in California, during WWII. The sailors’ work detail options were limited; the Navy was segregated and they were not permitted to fight at sea. The sailors worked around the clock, racing to load ammunition on ships headed to battle in the Pacific. They had little training and were pressured to load the dangerous cargo as quickly as possible.

After an explosion at the port killed 320 men, injured many others, and obliterated the docks and ships anchored there, many men initially refused to continue working under the same dangerous conditions. In the end, fifty men disobeyed the order to return to work. They were tried for mutiny in a case with far-reaching implications. There was more at stake than the Naval careers of fifty sailors. At issue were the Navy’s (and the country’s) policy of segregation, and the racist treatment of the Black sailors. Years before the Civil Rights movement began, the case of the Port Chicago 50 drew the attention of the NAACP, a young Thurgood Marshall, and First Lady Eleanor Roosevelt.

Through the words of the young sailors, the reader of The Port Chicago 50: Disaster, Mutiny, and the Fight for Civil Rights relives a slice of history as a Black sailor in 1944.

Read an excerpt of The Port Chicago 50 here.

Lynn: As an educator, a parent, and a grandparent, one of my goals has been to fan the flames of curiosity in kids. It’s a critical trait and one that often seems to get squashed somewhere along the K-12 march. I love books that encourage kids to ask questions. Marc Aronson’s books always seem to do this so well and none more than this year’s The Griffin and the Dinosaur: How Adrienne Mayor Discovered a Fascinating Link Between Myth and Science (2014)….

Cindy: Books about mythological animals are popular in my middle-school library, so I’m eager to capitalize on that interest while introducing my students to a book about observation, curiosity, and persistent research…..

Check out our whole post about this book, including Common Core Connections, at our Bookends Blog post for Griffin over at the newly designed Booklist Reader.

This is the true story of how one crazy idea led to recycling, teamwork, and a new school. It is about Fernando and his friends who go to school in a small town in Guatemala. The students squish into the classrooms, with two kids at each desk and two classes in each room. Some days it is too noisy to think.

Then one day the crazy idea hit: could they build a bigger school using old plastic soda bottles? Before long everyone was involved collecting bottles and stuffing them with old chip bags and plastic trash to make them stronger. These were “eco-ladrillos” or eco-bricks. then they stacked the bottles between chicken wire, and later they covered that with cement. And finally, they painted the walls orange.

But the story doesn’t end there. Kutner is donating her portion of profits from the book to Trash for Peace, and Slade is donating hers to Hug it Forward. Both organizations are funding bottle schools.

You can read an interview with author Suzanne Slade over at Sally’s Bookshelf.

SEPARATE IS NEVER EQUAL
Sylvia Mendez & Her Family’s Fight for Desegregation
by Duncan Tonatiuh
Abrams Books for Young Readers, 2014
ISBN: 978-1-4197-1054-4
Picture Book Nonfiction
Grades 1 and up
Source: school library
All opinions expressed are solely my own.

Almost 10 years before Brown vs. Board of Education, Sylvia Mendez and her parents helped end school segregation in California. An American citizen of Mexican and Puerto Rican heritage who spoke and wrote perfect English, Mendez was denied enrollment to a “Whites only” school. Her parents took action by organizing the Hispanic community and filing a lawsuit in federal district court. Their success eventually brought an end to the era of segregated education in California.

I appreciated the fact that this book addresses an historical event that is not very well known. We need more books that look at the experiences of a variety of different backgrounds. This book is very well put together. The design is fresh and appealing. The text is informative with being didactic. I found the inclusion of actual testimony fascinating. The other thing I really liked was that the story shows that simply winning the case doesn’t ‘fix’ everything. Even after being allowed into the white school, Sylvia faced harsh treatment from the other students. Winning in court does not mean attitudes have changed. Sometimes it takes time for attitudes to change as sad as that is, people’s beliefs don’t adjust overnight. Thanks to the urging of her mother, Sylvia found the courage to go back and by doing so she helped change the world. The notes and back along with the glossary, index, and bibliography provide a great deal of extra information for those who want to know more. An important story well-told and beautifully illustrated making for a winner of a book all around.

Sweaty Suits of Armor: Could you survive being a knight?
by Chana Stiefel; illus. by Gerald Kelley
48 pages; ages 10-14
Enslow, 2012

When my sons were of a certain age they decided that what they really wanted to be when they grew up was knights in shining armor. They snuck the colanders from the kitchen and used them as helmets. They turned tomato stakes into swords and pot lids into shields. They also watched every version of King Arthur (and any applicable Monty Python movies) that I would allow.

What they really needed was this book, because Chana Stiefel lays it out like it was back in the day: those heavy metal suits of armor were stinky and hot! Not only that, knights had to eat bad food, wield heavy swords, and were often taken prisoner and – if lucky – ransomed off. The unlucky ones were chained in the dungeon.

Stiefel strips the romance from the Middle Ages with language that is clear, fun to read, and so descriptive you can smell the sweat-sodden padding beneath the armor. She describes life in the Middle Ages war zone (no MREs), how to train for a knight (blood, sweat and tears), and the weapons of war.

At the back of the book is a handy glossary and list of resources for the would-be warrior. And an index!

Head over to Sally’s Bookshelf to read an interview with the author. 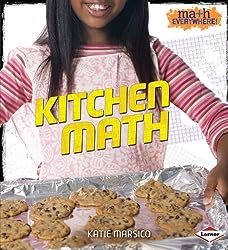 Booktalk: Math is everywhere in the kitchen! See what’s cooking inside this book—and how we need math to finish the job! You’ll need your math smarts to help measure ingredients, calculate cooking times, add and subtract fractions, double and halve recipes, convert cups to ounces and back again, and more.

Tony and Aunt Megan need to figure our how long the beef should roast.