Cindy: Almost 30 years ago, when I was a baby librarian—and not too many years after acquiring my college protest marching “No-Nukes” button—a reactor at the Chernobyl Nuclear Power Plant in Ukraine exploded and the news was full of the fallout. Today’s students may be fuzzy on the details, if they even know about this devastating accident. Rebecca Johnson will bring them up to speed with her book, Chernobyl’s Wild Kingdom: Life in the Dead Zone (2014).

While the book focuses on the radioactive wildlife and the research being done in the Ukrainian ghost town of Pripyat and the Chernobyl Exclusion Zone, the opening chapter sets the stage….

Lynn:  What a fascinating subject! Who would have imagined that wildlife would exist at all in the Exclusion Zone, where the radiation is measuring at what we have assumed to be horrifyingly dangerous levels….(more)

Check out our whole post about this book at our Bookends Blog post for Chernobyl’s Dead Zone over at the Booklist Reader.

Today over at Wrapped in Foil blog we are being nostalgic for our pet guinea pigs and sharing Gordon’s Guide to Caring for Your Guinea Pigs by Isabel Thomas.

Guinea pigs are really cute and make great first pets. In the book, Gordon the cartoon guinea pig (that’s him in the bottom left corner of the cover) guides children through the ins-and-outs of adopting and caring for a pet guinea pig.

The text is gently humorous, clear and concise. As an experienced guinea pig keeper, I can say it does a really good job of covering what a beginning pet owner would need to know, including the fact that guinea pigs do better when kept with other guinea pigs because they are social and that guinea pigs require special pelleted food with vitamin C added.

Be sure to read Gordon’s Guide to Caring for Your Guinea Pigs if you are considering adding guinea pigs to your family!

Sometimes we come across books that we simply fall in love with. For me, I’ve fallen hard for the Sally Walker’s fascinating and adorable non-fiction title Winnie: The True Story of the Bear Who Inspired Winnie-the-Pooh (Henry Holt and Co., January 2015), gorgeously illustrated by Jonathan D. Voss. This is one of those books you leave out on the kitchen table so family and friends can pick it up. It lingers in the imagination, makes other writers smack their heads and wish they’d thought of it first, entertains and informs. Just like the bear on the cover, this book is huggable, irresistible.

Sally, a Chicago-area author of fiction and non-fiction for young readers, including early readers, series, and a long list of non-fiction for older readers, has hit it out of the ballpark with Winnie. It tells the story of a World War I veterinarian named Harry, from Winnipeg, and the bear cub he meets and decides to buy. With detailed endpapers showing photographs of the real-life Harry, Winnie, and a boy named Christopher Robin, Sally takes readers through the sweet story of friendship, caring, and separation. Jonathan Voss’s warm illustrations enhance the story beautifully.

Read the full interview at AuthorOf.blogspot.com.

Active only during Women’s History Month,  the annual blog celebration features readers, commenters, and contributors working together to create a dynamic resource of thoughtful and thought-provoking essays, commentaries, and book reviews. Each post is related to children’s literature and women’s history. This year marks the blog’s fifth birthday! 😀

The complete 2015 lineup may be found on the site’s sidebar.  You can sign up to follow the blog, or receive it via email. Visit the site at http://kidlitwhm.blogspot.com to see “following” options, an archive of past contributions, and links to educational resources.  It’s suitable for parents and teachers, too.

The official Women’s HistoryMonth theme for 2015, is “Weaving the Stories of Women’s Lives.”

Questions regarding KidLit Celebrates Women’s History Month can be directed to its co-organizers: Margo Tanenbaum, of The Fourth Musketeer and Lisa Taylor of Shelf-employed.

Jacket flap intro: “Julius Rosenwald’s life was forever changed when he met Booker T. Washington, the well-known black educator. Washington introduced the president of Sears, Roebuck and Company to the deplorable conditions of African American schools in the South…” and, as they say, the rest is history.

In the early 1900s, Rosenwald led Sears to become the largest retail establishment in the world. He became a wealthy man, but felt that people should share their wealth during their lifetime. In addition to charities, Rosenwald became involved in the education of blacks – from offering college fellowships to matching funding for building schools in communities for their children.

The schools that black children attended during that time, 1895 – 1914, were deplorable. Courts had held that education could be separate but equal – but there was little equal about the quality of the education black children received. Rosenwald was inspired by Booker T. Washington’s book, Up from Slavery, and more than that, Washington’s philosophy of self-help. When he got to meet the great man, they talked about the need for better schools.

The first school Rosenwald helped build was in Loachapoka, Alabama in 1913. It wasn’t far from Tuskegee. Rosenwald donated $300 towards the cost of the school. The entire cost to build it was just under $950. Rosenwald insisted that communities be part of the building projects, raising funds and maintaining the schools so they had ownership. Families, both black and white, contributed.

In this book, Finkelstein weaves together a story about two men with vision – Washington and Rosenwald – and a time of great change. He also includes a neat section on how to build a school, from site selection to construction. He talks about fundraising, and the sacrifices families made to see their children educated towards a better future.

Where did the graduates from these schools end up? They were the parents of the generation who marched and sang and pushed this country towards civil rights. 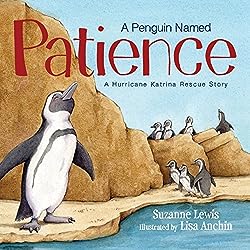 Booktalk: At roughly 6 pounds and approximately 20 inches tall, Patience, the South African penguin, is small, but at 24 years old she is also the “penguin in charge” of the penguin exhibit at New Orleans’s Audubon Aquarium of the Americas. On August 29, 2005, Hurricane Katrina devastated the city and severely damaged the aquarium.

It was dark and steamy hot inside her home at the Audubon Aquarium in New Orleans. Being an African penguin meant she was used to a warm climate, but not this warm!

Wilma Rudolph by Isabel Martin is an ideal biography for grades two and three. It has chapter titles: Meet Wilma, Growing Up, Adult Years and Later in Life. The back page gives suggestions for critical thinking using the Common Core.

Teachers will like the glossary, suggested titles for further reading and internet sites.

There are restaurants that try to sell you a three course meal for $10 or $15. It’s usually a restaurant that is at best average and is trying to build more business for unexceptional food. You walk out after spending $40 on you and your beloved and feel unsatisfied. I’ve got a better deal. How about combining exceptional poetry, interesting nonfiction text, and gorgeous illustrations? May I present for your literacy palate a wonderful meal titled Winter Bees and Other Poems of the Cold. Check out a stanza from the title poem:

We are an ancient tribe,
a hardy scrum.
Born with eyelash legs
and tinsel wings,
we are nothing on our own.
Together we are One.

Joyce Sidman’s poetry creates wonderful visuals and makes it a pleasure to read lines aloud. I’m especially drawn to the adjectives that she uses. The poems are impressive on their own, but then you get fascinating nonfiction with great wow! facts. Reading about the relationship between ravens and wolves, you learn that ravens may pester wolves to keep them on the move and finding food that the ravens can share. Wait until you learn about the skunk cabbage and it’s stinky cleverness. Thanks to Rick Allen’s vivid illustrations, you can easily visualize the information that is presented.

Skip the restaurant. Save your money and get a copy of Winter Bees. You will find yourself happier and with less calories to boot!

Spring is going to be right around the corner and there is no better way to get a touch of spring fever than by reading the books in the new Springtime Weather Wonders series.

Raindrops Fall All Around by Charles Ghigna and illustrated by Laura Watson celebrates the rain by exploring what it does and where it goes. The delightful rhyming text, with the playful the acrylic and digital collage illustrations, are sure to put a smile on the reader’s face. He or she will be looking forward to seeing the hillsides turn green, to splashing in the puddles, and to watching the water go down the drains during the next spring rain.

At the end of each book is a two-page spread of weather facts. This title includes an explanation of the water cycle and an introduction to studying wind with an anemometer.

A Windy Day in Spring  features adorable animals romping in the wind. Once again, the rhyming text by award-winning poet Charles Ghigna, keeps the reader bouncing right along.

Other titles in the series include Hail to Spring! and Sunshine Brightens Springtime. The books are available as hardcover or as board books for the PreK-2 set.

Be sure to share these lively spring weather picture books with young readers, and catch some spring fever yourself! If you would like to see our full review, visit Wrapped in Foil blog.

Muhammad Yunus grew up in the port city of Chittagong, back when it was still a part of India. He went to school, studied hard, joined the Boy Scouts and worked to help the less fortunate in his community. One of the things he noticed was how just a few coins could make a big difference to a family: it could buy rice to feed children, and allow women to buy raw materials from which to craft items for sale at the local markets.

Muhammad decided to study economics, thinking he could help make people’s lives better. After graduating college, he came to the US to continue studying and began teaching. But his homeland was torn by war. He returned to what now was Bangladesh, to a country devastated by drought and famine as well as the war.

His life changed when he met a woman who needed 22-cents to buy materials for making the bamboo stools she sold. But she could not borrow the money from a bank because that amount was too small. Muhammad knew it would be easy to give her the money, but he wanted to find a better solution – a long-term solution that would help the women become economically self sufficient. His idea: micro-lending. A village bank that would loan out small amounts to groups of people who would repay the loans as a group. The borrowers would begin with classes on banking and borrowing before they received their low-interest loans.

In this book, Paula Yoo tells the story of Muhammad, who was awarded the Nobel Peace Prize for his service to his community and the wider world. But it’s more than a biography; she infuses each page with cultural context and brings the reader into a world where 22-cents can make the difference between feeding a family and starving. Put this one on your “must read” list.