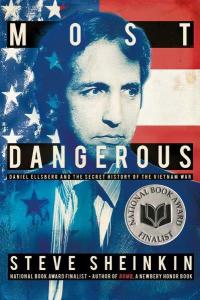 Most Dangerous: Daniel Ellsberg and the Secret History of the Vietnam War
by Steve Sheinkin
384 pages; ages 10 & up
Roaring Brook Press, 2015

This is a riveting tale of intrigue and power… a tale of an obscure government analyst turned whistle-blower that reads like a fast-paced spy novel.

“In the summer of 1964, Daniel Ellsberg was thirty-three,” writes Steve Sheinkin. After serving in the Marines he worked as an analyst with the Rand Corporation, a think tank that focuses on military and international issues. He was asked to work on a project focusing Vietnam as our country headed into war.

At that point, Ellsberg was hawkish. He believed the US was doing the right thing. He also knew that to get good information, you had to actually go to where the action was, so he visited Vietnam.

Read more over at Sally’s Bookshelf