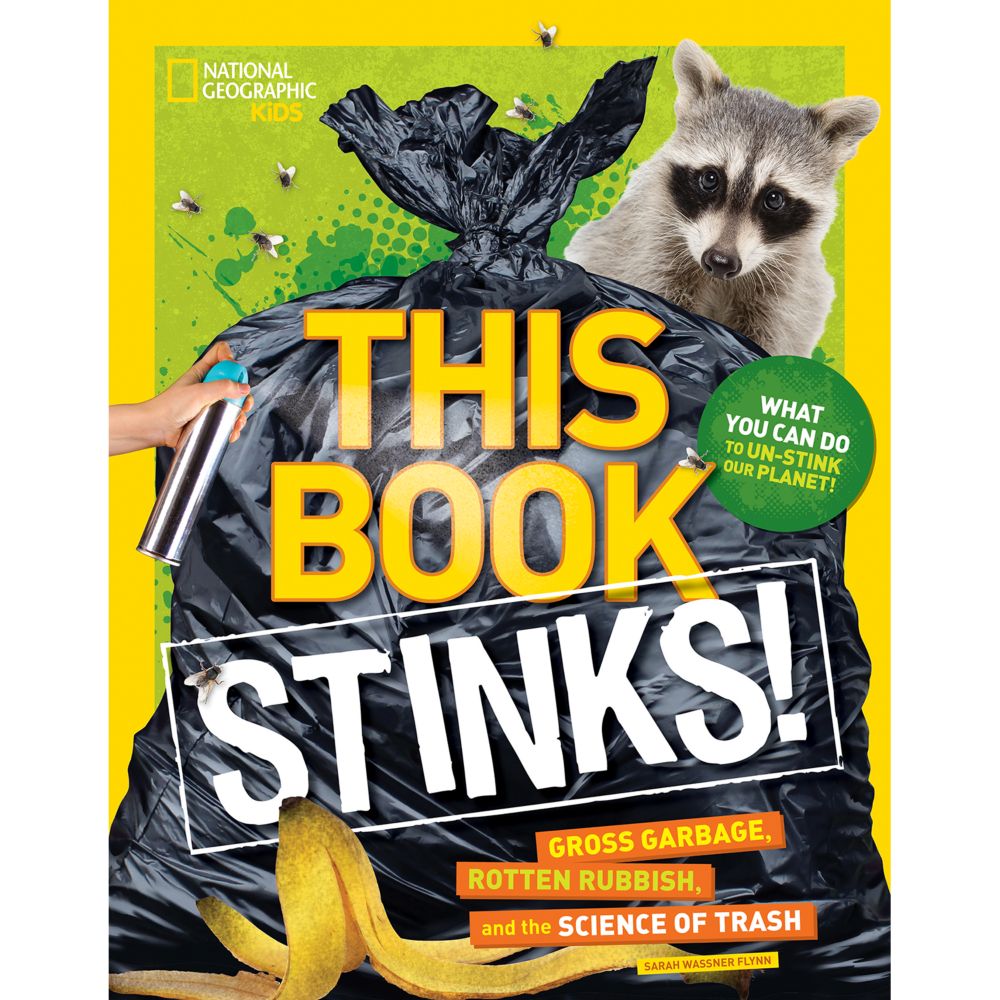 A book about garbage? Initially you might think that’s a stinky idea. But here’s the thing: What else could you write about that affects everyone as much as this does? All of us create waste and contribute to landfills. That levels the playing field when it comes to background knowledge too, so readers of all abilities can add to discussions.

The facts presented in this book are staggering. What if you told your students that the average person throws away in food the equivalent of 120 pizzas a year? Or that a family of four wastes about $1,500 worth of food a year? More than one quarter of all fresh tomatoes in the U.S. are tossed before they are sold. But a great thing about This Book Stinks! is that it’s not all about amounts of garbage. There is a lot of information about how we can make things better in regards to dealing with waste and how people around the world are doing this right now. For example, Adidas is now developing a sneaker that is made of fishing nets and recycled ocean waste. The last chapter, Take Out the Trash, is devoted to what students can do.

As a teacher, my favorite part of this book are the different formats that are used to convey information. It’s like a buffet of informational text. There are terrific infographics like the spread on pages 60-61 that illustrates how much food is wasted each year. Another presents info on garbage in space. Did you know that about 14 million pounds of space junk is floating up above? Other formats include question and answer, narratives, and flow charts. This is a great book to showcase how many different ways a young writer can reveal facts about a subject.

Students (or adults) may not like taking out the garbage, but This Book Stinks! will help them see it in a whole different way.

Prince: The Man, The Symbol, The Music
by Eric Braun (Author)

Booktalk: Prince Rogers Nelson wrote his first song at age seven, and soon taught himself to play the piano, drums, and guitar. In the early 1980s, Prince wondered how to make his music–a mix of pop, funk, soul, and R&B–more appealing to an audience that loved more mainstream rock shows. He ended up making Purple Rain, the hit movie and soundtrack that turned him into a megastar.

Snippet: From an early age, Prince was tuned into music. His mother said that when he was three years old, he would slip away from her in department stores to find the musical instruments. He would play the piano, the organ, or any instrument he could find in the store. “I’d have to hunt for him,” his mother said, “and that’s where he would be–in the music department.”

There’s a Bug on My Book!
by John Himmelman (Author / Illustrator)

Booktalk: Beetles fly, frogs hop, and slugs slide over the pages of this book, made to be read by a child while lying on the grass. Children interact with the book, with a tip, tap, and turn of the book, moving the critters along. The critters even interact with each other in surprising ways.

Up! Up! Up! Skyscraper
by Anastasia Suen (Author) and Ryan O’Rourke (Illustrator)

Booktalk: Snappy rhymes invite young readers to watch workers dig, pour, pound, and bolt a skyscraper into existence. Simple yet satisfying sidebars provide further information about each step in the construction process. Perfect for preschoolers and all those who dig diggers.

The Big Book of Canada: Exploring the Provinces and Territories (Updated Edition)
by Christopher Moore (Author) and Bill Slavin (Illustrator)

Booktalk: From Nunavut’s Barren Lands to the Torngat Mountains of Newfoundland, from Quebec’s Saguenay Fjord to the pingos of the Northwest Territories, explore the many fascinating places that make up this vast land. (Updated for Canada’s Sesquicentennial–150th birthday!)

Snippet:
SABLE ISLAND
For five hundred years, Sable Island has been both feared as a risk to ships and admired for its wild beauty. It’s best-known residents are herds of wild horses that have made the island home for hundreds of years.

The impact of the automobile on the fight for suffrage could not be denied.

On June 9, 1909, Alice Ramsey set out in a 30-horsepower Maxwell DA touring car from New York City in an attempt to be the first female driver to cross the United States. To compare, today’s Toyota Prius has about a 99 horsepower engine.  Ramsey had to deal with many roads that were unpaved, muddy, and full of large holes filled with water due to thunderstorms. She dealt with thirty foot deep irrigation ditches that crossed roads in Wyoming. A prairie dog hole in Utah caused a break in the front axle and Ramsey changed 11 tires during the 3,800 mile long trip. After 60 days of driving, with “18 days off for rest and repairs”, the crew made it to San Francisco and into the history books. When faced with adversity, Ramsey replied “There was only one thing to do. And that was to go ahead as well as we might and try to get out of it.” Ramsey’s journey inspired more long trips in automobiles and sent the message that women were very capable of handling this fairly new mode of transportation and the hazards that came with it.

I’m really impressed with this book. There are many threads that author Sue Macy weaves through it. First, we get to meet many “motor girls” like Alice Ramsey who would be great new additions to biography units and classroom wax museums. Additionally, they’re terrific examples of positive character traits like courage and determination. Macy also leads readers through the connection between the automobile and the women’s suffrage movement. Groups supporting suffrage traveled across the country, in cars, gathering signatures on petitions that would help push legislators to ratify the 19th amendment in 1920 and grant females citizens the right to vote. As if that isn’t enough, there’s another thread of the history of the automobile. Motor Girls is a fascinating ride on the road of American history.