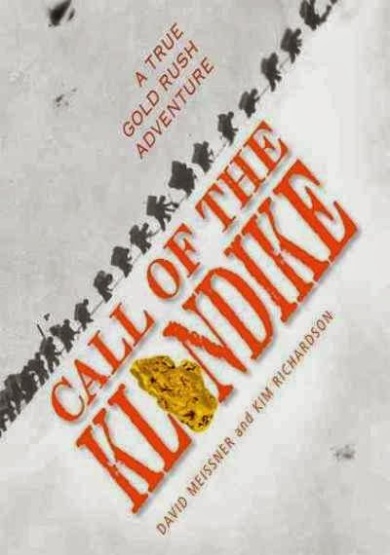 Survival stories resonate with readers on so many levels. They present challenges in the grandest of fashions. They create heroes who overcome obstacles we can only dream about. They compel our youngest readers to imagine adventures that can only seem foreign to their regimented lives. Call of the Klondike is a special kind of survival story. Primarily because it didn’t start out as one. Call of the Klondike began as a treasure hunt.

Stanley Pierce and Marshall Bond were the right people in the right place at the right time. Sixty-Eight miners had just arrived from a little known region in northern Canada on a steamship with four thousand pounds of gold, worth around a million dollars at the time. Both boys, in their mid-twenties from well-to-do families, telegrammed their parents right away for the funding to launch their own expedition to the Klondike. They would have to move quickly because 30,000 others had the same idea as Pierce and Bond.

Normally, we’d expect that two “city boys” who hastily threw together a trip into one of the most unforgiving environments in the world wouldn’t fair too well. They would have to transport thousands of pounds of gear up and over mountain passes that were yet to be completed. Once that seemingly unsurmountable task was complete, they would need to build boats that could sail on lakes that acted more like oceans and through rivers that acted more like washing machines. Then, there was the matter of actually discovering gold.

Call of the Klondike is a riveting account of Pierce and Bonds’ trip, but what sets it apart from other tales of treasure hunting is that you hear the story directly from Pierce and Bond. After setting out to retrace the harrowing trek through Alaska and the Yukon, author David Meissner uses sparse, descriptive narrative to weave together a litany of primary source documents chronicling the duo’s experience.

Kim Richardson, great-great-nephew of Stanley Pierce, received a bag full of letters, telegrams, and newspaper articles from a relative. Meissner happened to be good friends with Richardson. Thus, the story is presented through; letters home assuring parents, “Should I not find fortune, this trip will make a man of me, and should I get through this trip I shall be able to undertake anything in the world;” journal entries, “Took boats out of water and put them on top of ice. Piled cargoes ashore. Spent day reading and chatting;” and even mining agreements. One, signed and witnessed by a young adventurer, goes by the name of Jack London, who was particularly intrigued by Pierce and Bonds’ sled dog, Jack, who later became the inspiration for Call of the Wild’s Buck.

Not only is Call of the Klondike a riveting tale of treasure hunting and adventure seeking, it’s a true expose for how primary sources can be weaved together into an unforgettable story. Once I began reading, I didn’t put the book down. The story was strong throughout, the afterwards; satisfying, and even the author’s note provided context and relevancy to the tale’s importance within American history. Meissner immersed me in a time period I had little interest in before reading Klondike. And now, Call of the Wild will be my next read. Hopefully, many others who experience this story will reach for the London classic that may have otherwise been forced upon them. I’m certainly compelled to spend a little more time in world David Meissner has opened the gate to.