A True Tale with A Cherry On Top

“Before Ralph Waldo Emerson was a great writer, he was a city boy who longed for the broad, open fields and deep, still woods of the country, and then a young man who treasured books, ideas, and people.
When he grew up and set out in the world, he wondered, could he build a life around these thing he loved?
This tender and joyful portrait of the man whose vision helped shape the American spirit illustrates the rewards of a life well lived, one built around personal passions: creativity and community, nature and friendship.
‘May it inspire you to experiment and build the life you dream of living.'”

For a Tantalizing Taste and Something More, visit the blog of kidlit author, Jeanne Walker Harvey *** True Tales & A Cherry On Top  ***  to learn more about this book.

Cooper, Michael L. 2014. Fighting Fire! Ten of the deadliest fires in American history and how we fought them.  New York: Henry Holt.

From the “Great Fire of 1760,” which destroyed 349 homes in Boston, to San Diego’s “Witch Fire” of 2007, which destroyed 3,069 homes and buildings, burned half a million acres and killed 17 people, Fighting Fire! details ten of America’s worst fires.  Presented chronologically in individual chapters, Fighting Fire! combines an account of each fire with the evolution of fire fighting practices, and the public’s evolving view of fires, fire safety, and firefighters.

With plenty of photographs, quotes, and illustrations, Fighting Fire! is an engrossing read. Consider this passage from “Fire on the Water, New York, 1904,” which is accompanied by several photographs.

Some passengers saved themselves in grisly ways.  “I didn’t have no life preserver at all,” said ten-year-old Henry Ferneissen.  “I went down twice and I swallowed a whole lot of water, but pretty soon I caught hold of a dead woman and then somebody grabbed me with a hook.  If it hadn’t been for that dead woman I’d been drowned sure.”
One hour after embarking, the General Slocum was a smoldering ruin and most of its thirteen hundred passengers were dead.  One survivor said, “To my dying day I’ll never forget the scene. Around me were scores of bodies, most of them charred and burned.”

The General Slocum tragedy is the worse peacetime maritime accident in American history.  It was New York’s deadliest disaster until the twenty-first century.

Each tragic fire brought about some change or warning, albeit often small or initially unheeded, that informed future generations.  Following the fire in Boston, 1760, building codes and street design were re-examined.  Fire Prevention Week, recognized each year in October, is in remembrance of the Great Chicago Fire of 1871, which began on October 8. The San Francisco fire of 1906, highlighted the importance of reliable water supplies. The Triangle Shirtwaist Factory Fire of 1911, prompted new workplace safety regulations.  Out of each tragedy came knowledge that benefits us today.

Well-researched and documented, this is a perfect choice for school assignments or for anyone interested in becoming a firefighter.  I’m even suggesting it to my husband, a career firefighter.

See a slide show of images from Fighting Fire! at the publisher’s website.

Check out more of my reviews at Shelf-employed.
You can also find me on Twitter @shelfemployed and Facebook.
Copyright © 2014 L Taylor All Rights Reserved.

Juliuis Rosenwald was a wealthy man whose motto was, “give while you live.” He was very generous to both Jewish and Christian charities but after meeting Booker T. Washington, he philanthropy changed. Pop over to proseandkahn for the review. 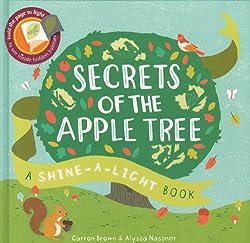 Booktalk: Explore a tree up close and you will find a world filled with great surprises! When you shine a light behind the page, you will see hidden wonders!

Snippet:
A fly whirs up
the tree trunk.

Something is
hiding on the
bark. Can you
see what is it?

See how to shine a light on the book in the 1:00 Secrets of the Apple Tree book trailer.

The Poetry Friday Anthology for Science

This anthology is fabulous.

Excerpt from Liquids Can’t Contain Themselves by Heidi Bee Roemer

Sticky honey leaks from a jar.

Liquids dribble and ripple and roll!

Sometimes salespeople, via media or in person, will start a sentence with this phrase “If you only buy one…”. I could use that pitch to teachers regarding The Poetry Friday Anthology for Science. If you only buy one book this year, this is the book you should buy. Of course, who knows a teacher that buys only one book? My point is that as a teacher, you will be hard pressed to find a book more valuable than this anthology. This is a set of 36 science related poems for each grade level. That’s right, a poem a week for each grade level in K-5. Go ahead and do the math and you will learn that we’re talking about 218 poems. That’s serious bang for your buck, folks. But wait, there’s more! Some of those poems are bilingual so you can share them in two languages. Each poem also has its own lesson plan. We’re talking about 218 lesson plans! This section is called Take 5! For example, the poem above has five different lesson tips that you can use. In addition to the poems and the lesson plans, you also get a terrific set of resources in the back matter. There are several lists of top notch books that you will want to use in addition to this anthology. There is also a list of outstanding poetry websites, a roll call of fun science websites, and more websites and blogs that are geared towards teaching science in grades K-5. All of this is included in the anthology. Also available are student editions for each grade level that include 5 extra poems at each level that are not included in the teacher’s edition. If you visit the publisher’s website, you will also find printables and audio versions of poems.

There are so many ways you can use these poems. Shared reading on a flip chart will be a must in K-1. For students working on improving their fluency, they could practice reading a poem and perform it. Want to practice finding a main idea in poetry? I would read Joseph Bruchac’s What We Eat and ask students to infer the main idea of the poem. You will find so many different uses for this anthology, so find a way to get a copy in your hands!

Capstone Publishers bring together a series of Non Fiction picture books where “Art and Science collide in exciting science adventures”. Each book in the series features a fold origami character that journeys through a scientific exploration.

“Diggin’ Dirt” has clever illustrations, a mix media of realistic nature photographs and digital illustration. This book is sure to capture the attention of the youngest in the household.  Our favorite part was at the end of the book, where we found simple instructions to make our very own, cute little origami dog!

Today at Growing with Science we are celebrating spring with Gardening Lab for Kids: 52 Fun Experiments to Learn, Grow, Harvest, Make, Play, and Enjoy Your Garden (Hands-On Family) by Renata Fossen Brown.

Renata Fossen Brown has gathered an inspiring collection of hands-on activities, one for each of the weeks in the year.

Kids can learn how to:

It is sure to make children want to get outdoors and give gardening a try.

How can you resist a title like this? Footprints on the Roof by Marilyn singer is full of wonderful earth poetry. My favorite is “Burrows”  – where we walk across the ground not seeing the “mazy metropolises” beneath the earth. I particularly like the last bit:

I try to tread softly:

You can read the entire poem here at Marilyn’s website.

So which dinosaur was the greatest?

Was it the tallest, the biggest, the strongest, the smartest, the weirdest, the fastest, or the smallest? Or was it the oldest bird, the best parent, the one with the best night vision, the toughest armour, or the longest nail spikes?

There are a LOT of books about dinosaurs for kids out there. But there are also a LOT of dinosaur obsessed kids out there so there is always room for one more well-done book. Brenda Guiberson and Gennady Spirin (the same author-illustrator team that brought us the excellent Frog Song last year) have created a book worthy to add to this overcrowded genre.

For a full review visit Supratentorial.