TROMBONE SHORTY by Troy Andrews is a picture book biography of his growing up in New Orleans and the importance of music in his life. One day he found a broken trombone.
Sample: “The next time the parade went by my house, I grabbed that trombone and headed out into the street. My brother James noticed me playing along and smiled proudly. ’Trombone Shorty!’ he called out, because the instrument was twice my size.”
Activity:
Make your own musical instrument like Trombone Shorty did.
He made a drum from a 12 pack soda box and used pencils for drumsticks. He used empty soda bottles as wind instruments.

You don’t go to Yosemite without hearing about John Muir. You can’t grow up in the western US without hearing tales of this intrepid explorer and conservationist. And with 2016 being a celebratory year for National Parks, this is a fine time to explore some books about this early explorer.

From 1868 to 1871, Muir lived in Yosemite Valley where he ran a small lumber mill. What I like about this book is Julie Dannenberg’s description of that waterfall:
“cascading,
crashing,
careening wildly over the side of the mountain.”

The beauty of this waterfall lures Muir and so one night in early April, he decides to explore it. Here is the delicious description of his journey:

“He climbs up, over loose and slippery gravel beds…. He is so close to the waterfall that the mist brushes his face…”

But that is not close enough. No, Muir decides he must climb up a ledge and behind the falls. And now it is a foaming, thundering waterfall on one side, hard granite on the other: a John Muir sandwich that nearly ends in disaster. But it doesn’t, and Muir writes about his adventure.

I love that there is back matter: a couple pages about John Muir and Yosemite, some resources and books for curious naturalists, and a few citations for those who want to know where the author pulled her Muir quotes.

Hoose, Phillip. The Boys Who Challenged Hitler: Knud Pedersen and the Churchill Club.
May 12th 2015 by Farrar, Straus and Giroux (BYR)
E ARC from Netgalley.com

In this wonderful piece of narrative nonfiction, Hoose brings us the experience of Knud Pedersen in his own words. As a Dane, the teenaged Pedersen was perturbed that his government had caved so easily to the Nazis demands, agreeing to cooperate with the Nazi soldiers in exchange for relative safety. While Norway was fighting the Nazis, it took a while before opposition to the Nazis took hold in Denmark, and that opposition was started by a group of teenagers headed by Pedersen. At first, the boys contented themselves with painting graffiti and doing small amounts of damage to Nazi property, but soon escalated to major acts of arson as well as stealing weapons and accumulating quite an arsenal. When the Danish people saw that not everyone was acquiescing to Nazi demands, the Resistance was able to take off. The Churchill Club, as the group called itself, continued to bedevil the Nazis, although the boys found it difficult to think about actually killing the soldiers. Eventually, the group was found out and arrested, and spent a lot of time in various jails. By this point, however, the Resistance was going full force. Luckily for the boys, they were tried by Danish officials and, in part because of their age, were not sentenced to death.

Based on intensive interviews with Knudsen, as well as Knudsen’s amazing archive of photographs and research, this well-researched book tells a riveting tale of people who stood up for what they believed, even though they were very young. I have always been interested in the various resistance groups, especially since most of them utilized my primary source of transportation– the bicycle!

Since we have been requiring students to read more nonfiction, this is a title I will order eagerly. This was a great length, had amazing primary source information, and was extremely interesting. I am so glad that Hoose followed up on a forgotten e mail with Pedersen, because this was a fantastic book.

Booktalk: Dirt bike racers don’t let anything stand in their way as they blaze to the finish line. Tight turns, steep hills, or huge jumps these riders brave them all. Take a look at dirt bikes, how they work, and the races they compete in.

We are headed to the seashore this week at Wrapped in Foil blog.

For our Nonfiction Monday review we have The Beach Book: loads of things to do at lakes, rivers and the seaside by Fiona Danks and Jo Schofield.

The Beach Book is really in a class all by itself. It evokes a time before standardized tests and kids having every minute structured for them. It is bursting with suggestions for getting kids outside and playing at the beach, ranging from how to make sand mermaids to conducting beach treasure hunts to old favorites like skimming (skipping) stones on water.

Each activity comes with a description, which is more of a list of suggestions of what to try rather than detailed how-to instructions. This leaves a great deal of room for spontaneity and creativity. Things aren’t too loose, however, because the authors list safety tips with many of the activities. These are common-sense precautions to take, such as knowing which way the tide is going (sometimes tides can come in rapidly and unexpectedly) or when adult supervision is recommended. The best part is that any of the activities can easily be adapted to non-beach or even indoor situations, and are perfect for multi-aged groups.

If there’s a trip to the beach in your family’s future, I highly recommend grabbing a copy of this book. Read it ahead of time to get imaginations charged up. Have a copy handy in the beach bag to keep the adventures coming.  Frankly, I can’t wait to visit a beach and try some of these activities myself!

Looking for more beach activity suggestions and reading recommendations? Get your bare feet sandy by visiting Beach Book Week at Wrapped in Foil.

Booktalk: Take a road trip from START to FINISH in the family station wagon and see opposites on every page! 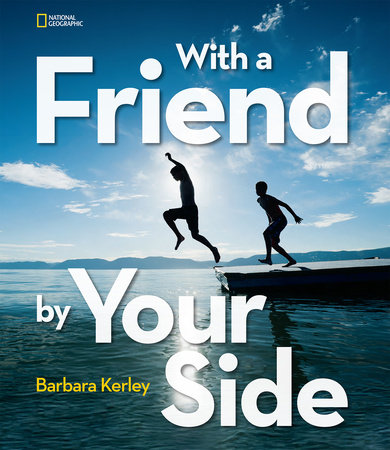 With a Friend by Your Side
written by Barbara Kerley
2015 (National Geographic Children’s Books)
Source: Review copy provided by the publisher

So, step right up. Don’t be shy.
Imagine what can happen with a friend by your side.

“How do you become friends with someone?” That’s the first question addressed by the photo essay With a Friend by Your Side. You do so by knowing that there is someone out there for you. All it takes is a willingness to be a friend. The second question is “Why have a friend?” As humans, it’s nice to have someone to share a laugh with. Literally as I type this, I can hear my two daughters belly laughing in the back bedroom. They are friends for life. You also want someone to share with. It’s good to talk to someone you trust who won’t tell your thoughts. Friends also are great for support. Whether it’s a hug, a “You can do it!”, or a holding of the hand, friends can provide the support we need to keep going in this big ol’ world.

With a Friend by Your Side would be an excellent way to start a lesson on friendship and/or kindness. It will set the tone for the values you want your students to consider. If you want to promote global awareness (Seriously, who doesn’t?), then find a copy of this book. Sarsy, Russia doesn’t look so far away when you see three kids reading a book together. “Hey, I do that too!” you say to yourself. When you see two kids from the Congo putting their arms around each other’s shoulders, that seems quite familiar too. Finding out what we have in common makes this sphere a little less big. In the back matter, you will find a thumbnail print of each photograph and a map showing their location. There’s also a brief essay by the author and quotes about friendship.

Combining simple but profound text by the terrific (look it up if you don’t believe me) Barbara Kerley with the usual spectacular photos by National Geographic will give you a winner every time and you cannot have enough good books about friendship in your classroom.

Got any “sneakeheads” at your school or library? This nifty, little history of the shoe won’t spend much time on your shelf! Short review over at Proseandkahn.

Balloons Over Broadway: the True Story of the Puppeteer of Macy’s Parade, written and illustrated by Melissa Sweet, is a picture book biography of Tony Sarg.

What was his big moment?

Sample: “Macy’s had heard about Tony’s puppets and asked him to design a ‘puppet parade’ for the store’s holiday window. So Tony made new puppets based on storybook characters, then attached them to gears and pulleys to make them move.”

Then Macy’s decided to have an annual parade. At first they had live animals but children were frightened.

So Tony tried puppets. He had huge puppets made of rubber but many people couldn’t see them.

Next Tony tried balloons. It was a success!

Inventions That Could Have Changed the World…But Didn’t!
written by Joe Rhatigan; illustrated by Anthony Owsley
2015 (Imagine Publishing)
Source: Review copy provided by the publisher

“Failure is not an option.” I have heard this phrase many times in staff development sessions. I want to speak up and say “Trite and tired phrases are not an option either!” In this really cool new book, failure is celebrated. These are inventions that just didn’t click for one reason or another, but as author Joe Rhatigan states on the inside flap, there is still plenty to learn from these efforts. I so want an amphicar. It was a car and a boat. There were about 4000 produced in the early 1960s but it wasn’t much of a car or a boat. Apparently Lyndon Johnson enjoyed his as he tricked friends by feigning that the brakes had slipped as he headed for a lake. Another of my favorites is the alarm bed. The bed wound up like a clock and dumped you out when the alarm went off. I would get to school faster if I had one of these! As the owner of two cats, I’m not as enthusiastic about the cat potty training device. Some things are just not meant to be. In addition to the highly entertaining inventions, there is an informative introduction to the origin of patents and why we need them.

Failure can teach you a lot. You don’t want to fail all the time, but an occasional humbling can be good for the soul. I lost a lot of games in my youth, but I learned how to handle disappointment. In addition, the losers usually have better stories to tell. This book may prove my point. There’s also a lot of interesting science in these attempts as well as the occasional “What were they thinking?”. As I was reading Inventions, I kept turning to my wife and daughter and telling them about different inventions and they wanted to hear more. That ladies and gentlemen is the sign of a winning book about failing.

Check out more hits and misses at NC Teacher Stuff.