History is replete with interesting friendships between unlikely people who come together because they share a cause, or are working towards a similar goal.  My sixth graders love these stories.  We’re in the middle of one right now, that of John Adams and Thomas Jefferson, and they are following every blip in this relationship with great interest.  In a few months, however, we will be studying a friendship that I find even more interesting – President Lincoln and Frederick Douglass.
Both men had a wary regard for each other: Lincoln abhorred slavery but his first priority was to preserve the Union; for Douglass, who had escaped bondage, the eradication of slavery was the single goal of most of his adult life. By the time of Lincoln’s assassination, however,  Douglass had come to this assessment of the President:
“Viewing the man from the genuine abolitionist ground, Mr. Lincoln seemed cold, tardy, weak and unequal to the task. But, viewing him from the sentiments of his people, which as a statesman he was bound to respect, then his actions were swift, bold, radical and decisive. Taking the man in the whole, balancing the tremendous magnitude of the situation, and the necessary means to ends, Infinite Wisdom has rarely sent a man into the world more perfectly suited to his mission than Abraham Lincoln.”
In THE HAMMER AND THE ANVIL:Frederick Douglass, Abraham Lincoln, and the End of Slavery in America, author Dwight Jon Zimmerman traces the lives of these two men in the form of a graphic novel with art  by Wayne Vansant.

The two narratives begin separately and wend their way together in the years leading to and during the Civil War – and the one meeting the two men enjoyed at the White House.  We learn so much about both men, the events that shaped them and the way in which they shaped events.  Zimmerman quotes from Douglass’ memoirs, which adds so much power to the narrative, and Vansant’s comic book-style illustrations are detailed and evocative. 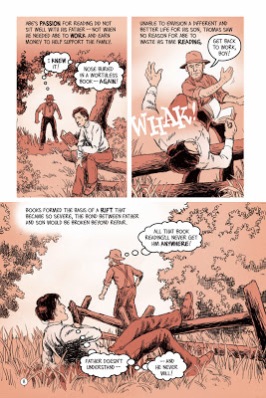 This is a must-have book for any middle school classroom – and I know that I will be using it extensively when we begin studying slavery and the events leading to the Civil War and the Emancipation Proclamation.

In a completely different vein, I was able to finish reading Joyce Sidman’s delightful collection of “apology Poems”: This is Just to Say: Poems of Apolology and Forgiveness: 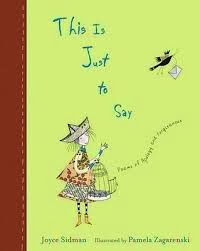 The premise of this collection of poetry made me smile: Mrs. Mertz, sixth grade teacher, shares William Carlos Williams’ famous apology poem with her class:

This Is Just to Say

I have eaten
the plums
that were in
the icebox

and which
you were probably
saving
for breakfast

Forgive me
they were delicious
so sweet
and so cold .

and then invites her students to  write similar  poems of their own.  These are funny, sweet and sometimes thoughtful – written exactly as sixth graders would think and express themselves. Best of all, the recipients of these poems “write back” – sometimes accepting the apology, sometimes not.  I so enjoyed reading through this collections, and can’t wait to share them with my sixth graders.