At Wrapped in Foil today, we are reviewing The Sweet Story of Hot Chocolate! by Stephen Krensky and illustrated by Rob McClurkan.

Written with a breezy conversational style so appropriate for a fun topic like this, the book follows the history of chocolate from the Olmec people of Central America to how it is consumed around the world today. You will recognize many of the famous people named, including Founding Fathers George Washington and Thomas Jefferson, as well as industry names such as Hershey and Cadbury. Did you know cacao beans were once so valuable that they were used as money? Fascinating!

The back matter is includes a significant amount of information on the rainforests where cacao trees grow, other foods that came from the New World, and other unusual items used as money. The final page is a quiz to help reinforce learning.

Although it is a Level 3 Ready-to-Read, the text is interesting enough and complex enough that it would be appropriate for older reluctant and struggling readers, too. In fact, adults looking for a quick summary of the history of chocolate are likely to find it useful.

Booktalk: Crackle! Crackle! Crunch! What’s hatching from that egg? It’s a young bar-tailed godwit. She will spend the summer in Alaska learning to fly, find her own food, and escape from scary predators. Her long, long journey begins in October when she flies to New Zealand. This 7,000-mile flight is the longest nonstop bird migration ever recorded. Follow along on her amazing voyage!

Snippet: The little female bar-tailed godwit at last breaks free of her egg. She steps into the world on long, wobbly legs. It’s nearly midnight, but it’s June in Alaska and still light. A cool wind blows the chick’s downy coat. She shivers, lifts her beak and squeaks, “Peep! Peep!”

MY PEN by Christopher Myers shows how his pen takes him on journeys. Christopher illustrates books and uses his imagination.

Sample: “My pen rides dinosaurs and hides an elephant in a teacup.”

Christopher wants you to use your pen and see what worlds will come out.

Activity:  Using crayons picture an imaginary world. It could be anywhere. On another planet. A country you just made up. Draw what people or animals might look like. Does it have lakes or oceans?

Booktalk: Look at the Reconstruction period through the life of one of the first African-American congressmen.

Snippet: Searching for more satisfying work, he went from waiter to cook –ah, the freedom to make such a move!– then from cook to better-paid pantryman on board the Altamont a Union transport steamer.

Don is one of my former students.

John Roy Lynch worked on a steam boat. Make a simple steam boat for yourself.

One bird is fancy. Another is plain.
But a bird is a bird.

Because, as Lizzy Rockwell shows us, there are some things all birds have in common. They all have beaks – even though some beaks are huge and fat, designed for eating fruit and others are thin and sharp, designed for spearing frogs.

All birds have wings. While some flap and glide high in the sky, others swim and dive in the ocean. And all birds begin life as an egg.

Feathers! And those feathers help birds survive. Using detailed illustrations and text that is poetic and simple enough for a beginning reader, Rockwell shows us what makes birds “birds”.

This week at Wrapped in Foil blog we are simply enthralled, charmed and captivated by a children’s picture book. 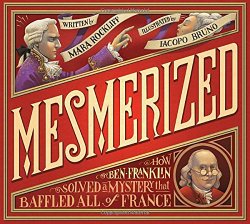 Mesmerized: How Ben Franklin Solved a Mystery that Baffled All of France by Mara Rockliff and illustrated by Iacopo Bruno has everything going for it:  history, a mystery, science, art, language, and the remarkable Benjamin Franklin. It has complexity like the layered torte that is described in the book. Let’s look at each in turn.

History:  The book is set in the time of the American Revolution. Ben Franklin has gone to France to ask King Louis XVI and Marie Antoinette for support for the war.

A mystery:  While in France, King Louis XVI asks Franklin to look into the mystifying Dr. Mesmer who supposedly can wave a wand and cure people using “animal magnetism.” Can it be true?

Science:  Ben Franklin (with a team of renowned scientists) use the scientific method to test the claims.

Art:  Iacopo Bruno’s illustrations perfectly capture the Rococo art that was popular in Paris, France at the time. The illustrations are also clever, with just the right amount of light humor.

Language: Besides learning the vocabulary of the scientific methods (observation, hypothesis, test, support, placebo effect), readers also learn the roots of the word mesmerized. Even better, common French words are also sprinkled about.

Ben Franklin:  The man had a simple appearance compared to the fancy French and Dr. Mesmer, but he also had many layers. He was a successful diplomat, prolific inventor and keen scientist, among other things.

The bottom line is that Mesmerized is an outstanding children’s book and every elementary educator is going to want to have a copy.

Look for accompanying resources at Wrapped In Foil and all about the scientific method at Growing With Science.

Booktalk: Hear the amazing story of the cliff dwellings of Mesa Verde, which were suddenly and mysteriously abandoned more than 700 years ago.

Snippet:
An Amazing Discovery:
On a snowy day in December 1888, two cowboys, Richard Wetherill and his brother-in-law Charlie Mason, stopped at the edge of a deep canyon in southwestern Colorado. Richard peered through the falling snow, hoping to find some cattle that had wandered off. Instead, he spotted something strange inthe cliffs below. His heart begin to race.

There, built into the side of the red-yellow cliffs was a hidden village of buildings and towers.

See this page inside the book.

See How To Build An Adobe Dwellings Diorama.

Over at Wrapped in Foil we are featuring a hot read for summer for middle grade and up, Big Top Burning: The True Story of an Arsonist, a Missing Girl, and The Greatest Show On Earth by Laura A. Woollett.

Big Top Burning chronicles the 1944 Hartford Circus Fire, which occurred during a performance of the Ringling Brothers and Barney & Bailey Circus. While the spectators were watching the Flying Wallendas high wire act, the big top tent caught fire. In only 10 minutes the whole thing had burned down, killing 167 people and injuring many more. It is one of the worst fire disasters in U.S. history.

Illustrated with black and white photographs from before, during and after the fire, and sprinkled with numerous quotes from spectators and victims, the readers feel like they’ve gone back in time to witness events firsthand. Although told in chronological order (with the disaster described at the first part of the book), the story does not lose impact because of the lingering questions that remain even to this day. How did it happen? Was it an accident or was it arson? Why were so many people trapped and killed? The event is not only a tragedy, but also a lasting mystery.

Big Top Burning is an excellent choice for older reluctant readers, because it is impossible to put down. Truly, nonfiction at its finest.

Booktalk: Who will win the NBA Finals this year? Read about your favorite basketball team in the Team Spirit series. Here is a snippet from The Golden State Warriors.

Snippet: When Wilt Chamberlain joined the NBA, Philadelphia coach Frank McGuire boasted that the seven-footer would score 100 points in a game. Chamberlain was amazingly quick and strong. Other players simply could not handle him. All he needed to make his coach’s prediction come true was a little help from his friends.

#kidlit Link of the Day:

Hiroki Sugihara, the son of a Japanese diplomat posted to Lithuania in 1940, tells how his father suddenly found himself confronted with a terrible dilemma.

Hundreds of Jewish refugees, driven out of Poland by the Nazis after they had invaded and then occupied that country, began to show up at the gates of the Sugihara home, which doubled as the Japanese embassy. The Sugihara’s, Hiroki, his younger brothers Chiaki and Haruki, his Auntie Setsuko, and his parents lived upstairs, and his father, Chiune Sugihara, worked downstairs.

Men, women and children, dressed in layers of clothing despite the July heat, were seeking visas that would enable them to travel through Russia to find asylum in Japan. Sugihara knew he had to do something, so he asked the crowd to choose five people to come inside and talk with him.

The next day, Sugihara cabled the Japanese government asking if he might be allowed to issue visas to the desperate refugees. His country refused his request, leaving Sugihara with a tough moral decision – turn away the people outside his gate and leave them to certain death at the hands of the Nazis or disobey his government.

Sugihara chose to issue visas to each and every person outside his gates, disregarding Japan’s order. Day after day, from early morning to late in the evening, Sugihara hand wrote about 300 visas per day. Even after the Nazis and Soviets began to close in on Lithuania, visas were written, right up until the family was ordered by Japan to leave when Sugihara was reassigned to Berlin.

In telling his father’s story, Hiroki writes in the Afterward that it is a story that he believes “will inspire [readers] to care for all people and to respect life. It is a story that proves that one person can make a difference.” His father remained a diplomat for many years after the war, eventually leaving the Foreign Service. In the 1960s, Chiune Sugihara began to hear from some of the people to whom he had given visas, and who referred to themselves a Sugihara survivors. He ultimately received the Righteous Among Nations award from Yad Vashem in Israel.

Dom Lee’s sepia-toned illustrations provide close detail and give a feeling of dimension and authenticity to the story being told, seemingly based on old photographs of the July 1940 events. They are done by an very unusual method. Lee applied encaustic beeswax to paper, scratched out the image he wanted and then added oil paint and colored pencil.

Passage to Freedom is indeed an inspiring story and one that should be shared with young readers. Sugihara was a real hero, a man who put human life above politics, even at a time when Japan was at war with China and relations were already contentious with Great Britain and the United States. One thing that did amaze me was that his government didn’t call him back to Japan to censure him.

An extensive PDF Classroom Guide for Passage to Freedom is available from the publisher, Lee & Low books.