Polar Scientist: The Coolest Jobs on the Planet
by Emily Shuckburgh with Catherine Chambers (Authors)

Keep On! The Story of Matthew Henson, Co-Discoverer of the North Pole
by Debora Hopkinson; illus. by Stephen Alcorn
36 pages; ages 6-10
Peachtree, 2009

I realize this book was published a few years ago – but this seems like the perfect time of year to read about Arctic explorers. Most people, if you ask who discovered the North Pole, will say “Robert Peary”. They might not realize there was another explorer whose courage, skills, and fluency in Inuit language contributed to the success of Peary’s expedition.

Matthew Henson was born in 1866, just after the Civil War. It was a time, writes Hopkinson, when poor black boys had few chances of visiting another country – much less the top of the world. But at the age of 13, Matt set out to look for a job – and adventure – and was taken on as a cabin boy aboard ship. He learned history, math, navigation, how to tie knots and fix most anything.

Later, he had the opportunity to join Peary on Arctic expeditions. Matt had to learn about surviving in the harsh climate. He took the time to get to know the Inuit people and learn their language, how to dress and hunt and build a dog sled. As with any grand venture, there are failures and Peary’s team didn’t make it to the North Pole until their last expedition in 1909.

Hopkinson details the rough, tough life of Matt, his brush with death and determination to reach the top of the world.

“The fact that Matthew Henson’s name is not widely known even today reveals much about the times in which he loved and the prejudices he faced,” writes Hopkinson in her author’s note. That changed in 1945, when the Navy recognized the surviving members of the expedition.

This is a great book to put in the hands of an adventure-hungry kid any time of the year, but particularly suited for reading on a cold day when you can bundle up and explore your own frosty neighborhood. Also a good pick for Black History month.

A Story of E.E. Cummings

A True Tale with A Cherry On Top
Author: Matthew Burgess
and Illustrator: Kris Di Giacomo

“There once was a boy with a big imagination who loved to play tag, climb trees, and gaze out of his window. Inspired by the world around him, he expressed his excitement in pictures and poems. Before he could even write, he played with words and said poems aloud. And when he got older, he filled page after page with poems.

This sensitive and spirited glimpse into the life of E. E. Cummings … is a lively story starring Edward Estlin, the playful child fascinated by words, who will grow up to become one of America’s most beloved poets. Some of Cummings’ most wonderful poems are integrated seamlessly into the story…”

For a Tantalizing Taste and Something More, visit the blog of kidlit author, Jeanne Walker Harvey*** True Tales & A Cherry On Top  ***  to learn more about this book.

If the cover is not enticing enough, turn the page and allow yourself to get sucked into the deepest, darkest places to view the wondrous animals who live there. Full review at Proseandkahn.

It’s not quite Black History month, but this week is a great time to introduce young readers to a hero they might not have heard of: Vivien Thomas. Way back in 1944 he was part of a team that performed one of the first successful heart operations on a child. This is a story about the medical breakthrough that not only saved the lives of tens of thousands of children but also opened the way for future heart surgeries.

The team that performed this high-risk surgery included surgeon Dr. Alfred Blalock, pediatric physician Dr. Helen Taussig, and African-American lab assistant Vivien Thomas. Blalock received the fame, but it was Thomas who developed and perfected the surgical technique to repair the hearts of children born with “blue baby” syndrome. In fact, he was the only person who had ever carried out the surgery successfully on a research animal.

But most of the people working at Johns Hopkins thought Thomas was a janitor! You can read the full review at Archimedes Notebook.

The Curious Parts & Pieces of the Natural World

with help from John Niekrasz

I can’t say enough about this beautifully illustrated book by Julia Rothman. I’m a little late to the game since it came out in early 2015, but when I finally ordered it I couldn’t put it down. If I had gotten my hands on this book as a kid, I would have first retreated to my desk to copy as many of Rothman’s illustrations as possible, and then ventured outside to see which of the hundreds of awesome nature-y things I could find!

She has previously published a similar title, Farm Anatomy: the curious parts and pieces of country life, but I think the broader appeal of nature in general will find her more readers. What makes me love this more is that Rothman grew up in the Bronx and currently lives in Brooklyn. She was inspired by taking nature walks in her neighborhood park! And while you may not find an elk or geoduck in New York City, you will find their illustrations and over 700 more in this book. From minerals to snowflakes, and mushrooms to salamanders, Rothman has it covered, along with tidbits of information like Five Rules for Grazing Wild Edibles and Anatomy of a Jellyfish.

A must-read or browse for any child at all curious about nature, and adults too! (This book was on the Library circulation desk while I was writing this and an older gentleman asked me to place it on hold for him!)

For a look at what’s inside this great book, check out:

Greetings of the New Year, guys! Hope that 2016 turns out to good and prosperous for all of you. I started the year right by going to see the new Star Wars movie. Wow! Was it great?You bet it was! I won’t talk about the movie right now because I could go on all day but I will tell about a really cool Star Wars book.

It’s Star Wars The Force Awakens: The Visual Dictionary and, man, is it ever great! Lots of very cool photos of the characters, equipment, droids, weapons, starships, etc. with information about each of them. Want to know what happened between The Return of the Jedi and this movie? It’s in here! Want to know about the starship graveyard on Jakku? Kylo Ren’s lightsaber? Rey’s speeder? Want to learn more about TIE and Resistance pilots? It’s all here–and a whole lot more!

Read the rest of my review at the Boys Rule! Boys Read! blog. 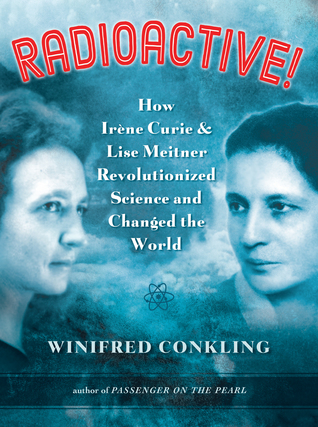 E ARC from Netgalley; paper copy from Baker and Taylor

Check out today’s podcast for fiction books with science connections!

Marie Curie had a fascinating story that many younger readers have heard, but her daughter Irene’s story is almost more fascinating because of the time during which she lived. Largely left to her own devices by her very driven scientist parents, Irene pursued similar academic interests, but also helped out with X-Rays at field hospitals during WWI, and at a very young age! Armed with both experience and knowledge, she worked in her parents’ lab and went to college, where she excelled academically. She also met and married a fellow scientist, Frederic Joliot, and the two worked together and discovered artificial radiation. While the science was a bit hard for me to follow, the depiction of a woman struggling to be recognized in an academic science field in the early 1900s was fascinating.

We also learn about the slightly older Meitner, who also struggling not only to obtain an education, but to find jobs in her field. She worked with another scientist, Hahn, and actually took precautions against radiation poisoning in the labs where she worked, unlike the Curies! She was involved in experiments involving fission, but her work was interrupted by WWII. Feeling that her academic repute, as well as her Austrian passport, would protect her from Hitler’s targeting of people of Jewish descent (which she was, although she felt Protestant), she did not leave Germany when there was an exodus of Jewish scientists. She was so stubborn about staying that she eventually had to be nearly kidnapped by friends in the scientific community and removed to Sweden! She continued to work, but was thwarted by lack of recognition and the generally difficult circumstances of moving to a new country at the age of 60.

While Curie and Meitner were often at odds scientifically, their experiences with trying to work in a field that was mainly the domain of men was very similar, and is an enlightening thing for teens to read about today. The book is filled with fascinating moments, and is an excellent choice for libraries where a lot of research is done. While I read nonfiction for fun, I don’t have many middle school students who will sit down to 200+ pages of nonfiction. I wish I did, but I don’t.

A Story About Jane Adams

A True Tale with A Cherry On Top
Author: Tanya Lee Stone
and Illustrator: Kathryn Brown

“Ever since she was a little girl, Jane Addams hoped to help people in need. She wanted to create a place where people could find food, work, and community. In 1889, she chose a houseman run-down Chicago neighborhood and turned it into Hull House – a settlement home – soon adding a playground, kindergarten, and a public bath. By 1907, Hull House included thirteen buildings. Andy the early 1920s, more than nine thousand people visited Hull House each week.
The dreams of a smart, caring girl had become a reality. And the lives of hundreds of thousands of people were transformed when they stepped into the house that Jane Addams built.”

For a Tantalizing Taste and Something More, visit the blog of kidlit author, Jeanne Walker Harvey*** True Tales & A Cherry On Top  ***  to learn more about this book.

Reading & Writing #kidlit #Review Haiku:
Explore life in the
polar regions: the Arctic
and the Antarctic.